Gramophone:
"This is the first recording to do full justice to Le tombeau resplendissant...The piece emerges not as an inferior sequel to Les offrandes oubliées but as a powerful and deeply personal symphonic poem in its own right...L’Ascension is more subject to the vagaries of live recording...but again Järvi has the full measure of the piece." 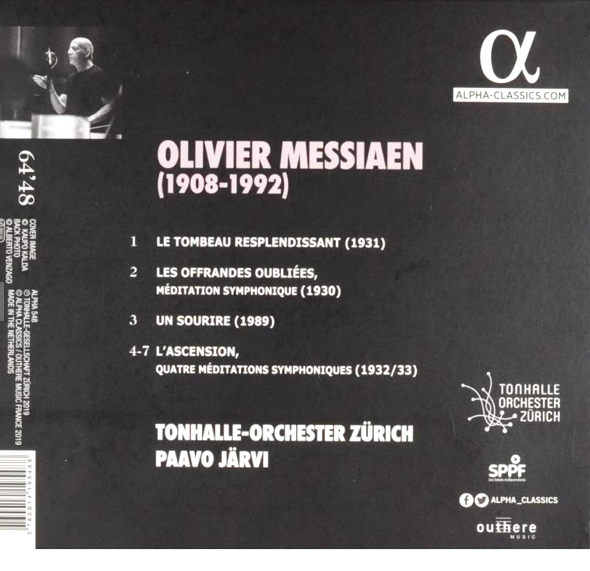 Paavo Järvi inaugurates his new contract as conductor of the Tonhalle Orchestra in Zurich with a pogramme devoted to Messiaen. Alpha Classics will accompany this extremely promising combination: ‘I’ve always admired French music very much. (…) I think Messiaen is the most original voice, someone absolutely unique. You need only listen for three seconds to a work by Messiaen to be sure that it is by him. His style is so clear, so unmistakable. In his two early works Les Offrandes oubliées and Le Tombeau resplendissant, religion and mysticism play an important role. If you listen carefully, you will notice how a harmony is continually transformed, so that you can never predict what sound will come next. But Messiaen’s harmonic language is not experimental: it produces an inevitable meaning, and you get the feeling that the chord sequence can be that way and no other.Music is a language of its own; music begins where words leave off.’