Polyhymnia and PolyCast recorded the world premiere of Detlev Glanert’s Bosch Requiem in the Saint John’s Cathedral in Den Bosch. This capped off a 8-year-long celebration – Bosch 500 – leading up to 2016 and the 500th anniversary of Bosch’s death. This is the same cathedral where the painter Jheronimus Bosch was buried on Aug 9, 1516. Jheronimus Bosch 500 and the Royal Concertgebouw Orchestra commissioned composer Detlev Glanert to compose the requiem for soloists, choir and orchestra with the goal of converting “Bosch’s demonic paintings into music.” It was performed by the Royal Concertgebouw Orchestra and the Netherlands Radio Choir, under the direction of conductor Markus Stenz.

Recording in such an enormous cathedral brings its own set of challenges, including the daunting task of hanging microphones 3 stories above the floor. This was made even more difficult by the addition of the organ, plus an orater positioned in the pulpit in the center of the cathedral and an offstage choir positioned in the rear of the cathedral. This is one of the biggest cathedrals in the Netherlands, so you an imagine the distances involved! Finding a suitable space to work was also a challenge, as there was very little room available. In the end we set up an audio control room in the church’s museum, surrounded by gargoyles and a replica of the cathedral itself. The recording was made in HD video and 96k surround, and was edited within three days for DVD. Interestingly, we also recorded the same composition, including a live radio broadcast, in The Concertgebouw on the following day. The recording in The Concertgebouw (in DXD!) will be a released on the RCO Live label. 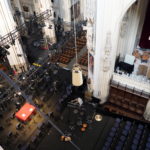 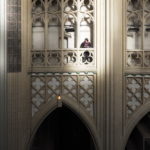 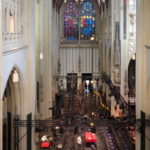 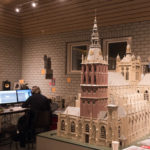 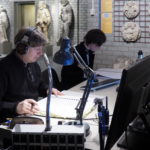 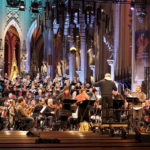